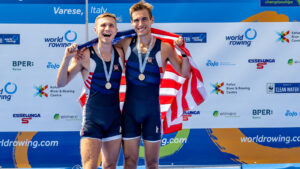 Nathaniel Sass (right) and Collin Hay (left) on the medal stand at the World Rowing Championships in Italy.

Sass, a Canisius High School graduate, and Hay won the World Rowing Championships in the under-23 lightweight men’s pair Friday on Lake Varese in Varese, Italy.

Sass and Hay, who trained for the event out of the Buffalo Scholastic Rowing Association boathouse, finished in 6:36.94 to earn the gold medal. Italy’s Francesco Bardelli and Stefano Pinsone took silver in a 6:37.92. Chile’s Manuel Fernandez Antri and Rodrigo Paz won bronze in a 6:41.76.

The American duo sat in third position off the start, just behind Chile, with Italy powering off the start line to take the early advantage. However, Hay and Sass stayed close in the first 500 and then used their base strength to move into first at the 1,000-meter mark.

“The thing we noticed was that we had a really good base rate. We wanted to keep that,” Sass said. “The issue was off the start. Some of those other crews were really explosive off the start – Italy, Hungary – they just jump off the line.

“We really just wanted to reduce that sting of their initial attack by keeping a more elevated first 20 strokes. Keep that margin smaller, so when we went to base rate, it was less of a gap to make up.”

The U.S. extended its advantage over the third 500 meters, taking the lead out to nearly two seconds. Sass and Hay held off Italy for the championship.

“We did what we said we were going to do, but it’s surreal when it actually happens,” Hay said. “This has been something I’ve dreamed about for a long time. At the 1,500, I was like, ‘Oh my God, this is it. We’ve got this.’ That (race) was every ounce of everything I’ve got.”

The pair trained in Hay’s hometown last year for Worlds, but moved their training to Western New York this summer, with both living at Sass’ parents’ house and their getting direction from Sass’ former coach at Canisius.

“Nathanial Sass and Collin Hay executed this race to perfection,” said R.J. Rubino, who has been their coach during their training with BSRA. “Our training and preparation paid off. You could see their superior strength and conditioning kick in at the 1,000-meter mark.

“We did this for our home, the City of Buffalo,” he said, noting help from BSRA, Canisius, donors and families. “I hope this inspires people to aspire for and achieve greatness in their lives.”

Elena Collier-Hezel, a Park School graduate and longtime member of the West Side Rowing club, won a bronze in the U23 women’s four with coxswain Friday. Collier-Hezel now rows for the University of Michigan.

Elena Collier-Hezel, a Park School graduate and longtime member of the West Side Rowing club, won a bronze in the U23 women’s four with coxswain Friday. Collier-Hezel now rows for the University of Michigan. 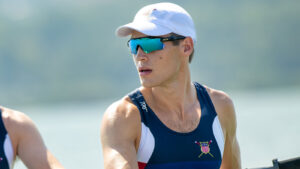 More posts by Mark Skowron
We use cookies on our website to give you the most relevant experience by remembering your preferences and repeat visits. By clicking “Accept”, you consent to the use of ALL the cookies.
Cookie settingsACCEPT
Manage consent