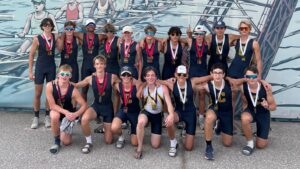 Rowing collects medals at Head of the Cuyahoga

Canisius High School Rowing is off to a strong start following its first regatta of the fall season as the Crusaders took second overall in the Head of the Cuyahoga in Ohio this weekend.

On a winding 5-kilometer course through downtown Cleveland, Canisius competed against high school and club teams from the Great Lakes region and southern U.S. The Crusaders finished second only to host St. Ignatius of Cleveland, a fellow Jesuit school.

Canisius High School Rowing will compete next in a back-to-back race weekend with Head of the Buffalo at Buffalo Scholastic Rowing Association on Oct. 15 and the Head of the Niagara at West Side Rowing Club on Oct. 16.

More posts by Mark Skowron
We use cookies on our website to give you the most relevant experience by remembering your preferences and repeat visits. By clicking “Accept”, you consent to the use of ALL the cookies.
Cookie settingsACCEPT
Manage consent